How many 'other Fergusons' are there? 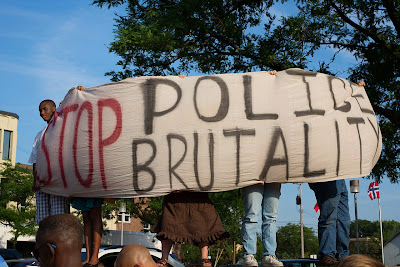 What happened in Ferguson could happen elsewhere in America.

That’s the message from experts on race relations and from an analysis of census data about American cities following the protests in the St. Louis suburb that erupted after the shooting death of an unarmed black 18-year-old at the hands of a white police officer.

Ferguson, Mo., may be an extreme example, but it’s part of a larger pattern in which many US communities have police forces that don’t come close to mirroring the racial composition of the populations they serve. Even where Ferguson-style gaps between the police and wider community don’t exist, it’s common across the United States for blacks to feel that the criminal-justice system is stacked against them and that political power eludes them.

What that means is that, despite the real progress the nation has made on race relations, another tragic occurrence similar to the killing of Michael Brown in Ferguson could spark street protests in other US cities.

Read more: How many 'other Fergusons' are there?