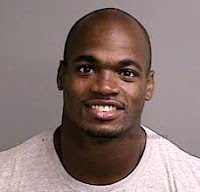 NFL star Adrian Peterson being charged with child abuse after beating his son with a switch has again raised the issue of child discipline. I like many my age grew up in the 70s and 80s where beating was a way of discipline. It's what our parents knew and did. I was spanked with a belt, the switch you had to go get yourself ( ..don't bring back no little switch either), and a damned Hot Wheels track, you remember the orange one. I don't believe at all that my parents beat me. As a matter of fact 99.8% of the time I had earned that ass whipping and it taught me right from wrong. Let me say I wasn't just beaten, there were talks and lessons that accompanied those beatings. But then again that was in the 70s.

Now most in society are against beating a child and like my wife and I don't beat their children. In the Black Community there are still a good number of old school parents and grandparents who believe in spankings. They follow the spare the rod and spoil the child rule. The problem now is that what many consider discipline many more consider abuse. Is spanking a child abuse?