African Americans don't need to be told to hate or mistrust the police. 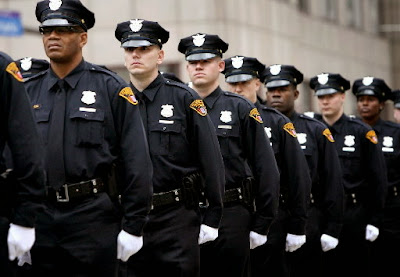 I'm convinced that conservatives and cops think black people as a whole are incapable of thinking for ourselves. First we had to be told by Obama, Holder, and Sharpton to get mad when no no cop was indicted in the Garner or Brown cases. I mean of course we wouldn't have gotten mad. Why would we? I mean Garner could have been our brother, father, grandson, or nephew. No way we internalize that, we of course would have went on our merry little ways if not told to be angry.

But now I have just found out from conservative media and the police that I and several million other blacks have never had an issue with or mistrusted the police until Obama, Holder, and Sharpton told us we had an issue with them. I just found out that all those prior negative experiences (although I like most black men have no record and have never committed a crime) I have had with police didn't make me bitter or distrustful of them it was that "evil" triumvirate of Obama, Holder, and Sharpton that made me feel that way.

Former NY mayor Guiliani who has done more to hurt minority and police relations by always taking the cops side than any member of the "evil" triumvirate said on Fox News Sunday ( where else) that "We've had four months of propaganda, starting with the president, that everybody should hate the police, I don't care how you want to describe it -- that's what those protests are all about."

Guiliani would be right if only police abuse and brutality had not been prevalent in the minority community long before President Obama was in office and Holder was appointed Attorney General. Generations of black and brown people have grown up in the United States and have had to deal with negative interactions with the police. That's just a fact and all police and conservatives bitching and moaning about it won't change that fact.

Guiliani and his ilk have made a false equivalency between protesting the death of Eric Garner and wanting better treatment from the police with being anti-cop. I'm sorry that comparison is simply bullshit. To believe that the comparison you would have to believe that the only way to do police work in minority communities is to violate people's civil and human rights.

If cops want the protest to stop then they should stop whining about being called out for their behavior and make changes to that behavior. What will help heal the rift is police acknowledging they have been occupying communities of color and not policing them. What will bring change is treating minority communities the same way you treat others. What will is actually reaching out and getting to know the community you police and finding out who is trouble and who is a young man on his way from school.

Until that happens the mistrust and in some cases hate will linger. No one will have to tell anyone what to think because we know firsthand.