Derrick Rose on I Can't Breathe Shirt: I made my point 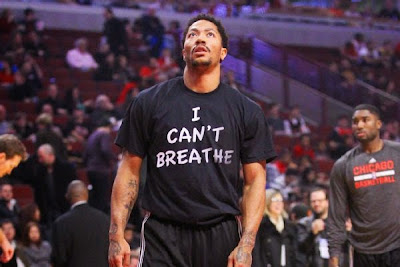 [SOURCE:ESPN] For the first time since wearing "I can't breathe" shirt in support of Eric Garner before Saturday's game against the Golden State Warriors, Bulls star Derrick Rose explained his decision after Monday's practice.

"I grew up in it," Rose said. "I saw it every day. Not killing or anything, but I saw the violence every day and just seeing what can happen. If anything, I'm just trying to change the thoughts of the kids' minds across the nation, but it starts here."

"I wouldn't say I'm going to do it every time, it's just something that I just felt," Rose said of making such a public statement. "Usually I stay out of politics and police brutality. I'm not saying all cops are bad or anything, I'm just saying what happened them days is uncalled for, and I think that hurt a lot of people. It hurt the nation.

"But my biggest concern is the kids. I know what they're thinking right now. I was one of them kids. When you live in an area like that and you don't got any hope, and police are treating you any way. I'm not saying all police [officers] are treating kids bad, but when you live in an area like that, it gives you another reason to be bad. My biggest concern are the kids and making sure that my son grows up in a safe environment."

Rose acknowledged that one of the reasons he decided to wear the shirt was because of his son, P.J., who turned 2 in October.

"That's one of the reasons why I wore the shirt," he said. "I'm a parent now. Probably two years ago, it probably would have been different. I probably would not have worn the shirt. But now I'm a dad, it just changed my outlook on life, period. I don't want my son growing up being scared of the police or even having that thought on his mind that something like that could happen.