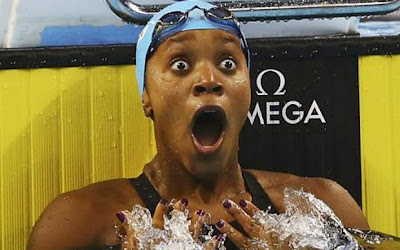 Alia Atkinson became the first black woman to win a world swimming title when she triumphed in the 100m breaststroke at the world short-course championships in Doha on Saturday as more records tumbled.

Jamaican Atkinson, 25, claimed the title and equalled Ruta Meilutyte's world record of 1min 02.36sec in the process - although under governing body FINA rules this still equates to a new record.

Meilutyte appeared on course for a successful defence of her title only for her rival to move on to the Lithuanian's shoulder at the final turn.

Atkinson then clawed her way down the final length before out-touching the 17-year-old by 0.10sec.

Watch a post race interview with Alia Atkinson below: