Should NY police protest stop until after slain officers funerals? 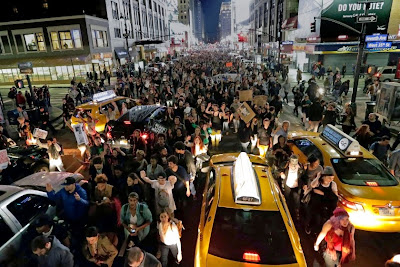 New York City Mayor Bill de Blasio has asked for the protest that have resulted from the non indictment of a police officer in the death of Eric Garner to cease temporarily until two slain police officers are buried.

"We are in a very difficult moment. Our focus has to be on these families," de Blasio said Monday at police headquarters. "I think it's a time for everyone to put aside political debates, put aside protests, put aside all of the things that we will talk about in all due time."

Protesters have not heeded his call and continue to protest. Do you think that they should stop the protest until after the officers are laid to rest? Do you think that it's necessary not to stop and to keep pushing while this is a hot button issue or risk losing momentum?