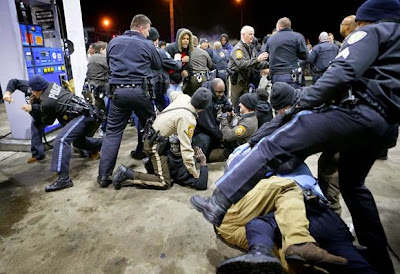 Police did not identify the person killed but Toni Martin, who was at the scene, said he was her 18-year-old son, Antonio Martin.

Several protesters also arrived at the scene shortly after the shooting. Many stayed overnight.

St. Louis County police said the incident started about 11:15 p.m. Tuesday as the Berkeley officer "was conducting a routine business check" at the Mobil gas station at 6800 North Hanley Road.

The officer saw two people outside the station, got out of his vehicle and approached them. One of the suspects pulled out a handgun and fired at the officer.

"Fearing for his life, the Berkeley Officer fired several shots, striking the subject, fatally wounding him," the release from the county police said. "The second subject fled the scene."

Berkeley police requested that the county department's Crimes Against Persons Unit handle the investigation of the shooting. Detectives "recovered the deceased subject's handgun at the scene," the release from county police said.