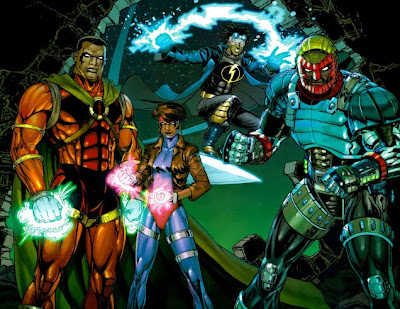 Great news! The company that gave us Static Shock, Hardware, and other super heroes of color is back, Milestone Media has risen again!

The idea arose not just in the wake of Dwayne McDuffie’s death, but also at the wake to remember the man.

Reggie Hudlin, the “Django Unchained” producer, spoke at the gathering in 2011 with artist Denys Cowan and Derek Dingle, who with McDuffie had co-founded Milestone Media, the prominent minority-owned comics publisher. McDuffie, also known for his DC Comics work, was widely considered to be a pioneer in his efforts to diversify the comic-book industry, prior to his shocking death at age 49.

“Derek said, ‘It’s been too long. We’ve got to restart the company’,” Hudlin recounts to The Post’s Comic Riffs, of that day in 2011. “So the three of us have been working for the past two years on sorting out all the business, and now we are the core of Milestone Media 2.0.”

That’s right. Hudlin, Cowan and Dingle tell Comic Riffs that they are working together to revive the company that debuted more than 20 years ago before its demise in 1997 — a publisher that could boast of such heroes of color as Icon, Hardware and Static Shock. That means Milestone titles will soon return to comics shops physical and virtual.