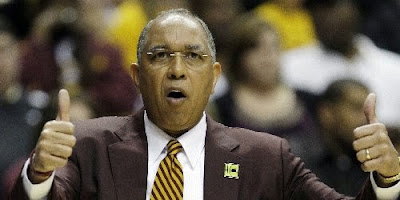 A group of prominent black coaches headlined by Tubby Smith and Shaka Smart are forming an organization to address the dwindling numbers of minority head coaches in college basketball.

The National Association for Coaching Equity and Development is in response to the dissolution of the Black Coaches Association. Ten years after minority coaches held more than 25 percent of the jobs across the country, the percentage dropped to 22 percent last year. And another 12 minority coaches have been fired this season.

As the NCAA's crown jewel — the men's Final Four — descends on Indianapolis this weekend with all four teams coached by white men, Smith, Smart, John Thompson III and a growing list of some of the game's most accomplished coaches say they are answering the call from those who came before them to speak up with authority and address the issues that have bubbled back to the surface.

"There hasn't been a voice for people speaking out and saying, 'Look, what are you all doing administratively? What's this about? Why has this all happened?' And question it," Smith, who won a national title at Kentucky and now coaches at Texas Tech, told The Associated Press.

Smith was one of the charter members of the Black Coaches Association, a once-powerful group headed by trail blazers like John Thompson, George Raveling and John Chaney to kick down the doors that colleges and universities slammed in the faces of minority coaches.

So it pained him to watch the BCA lose its influence in recent years while struggling to come up with funding from the NCAA and other sources. As the BCA started to disappear, so have the opportunities for black coaches across the country.

The new group, the National Association for Coaching Equity and Development, has more than 40 minority coaches on board and aims to replace the now-defunct BCA as the most influential advocate to push schools to give candidates of color more consideration for head coaching jobs. It also wants to better prepare the younger generation of coaches to succeed in those jobs and help athletes gain admission to college and excel when they get there.