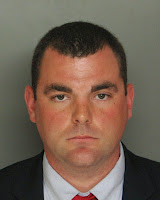 I'm sure by now that you have all seen the tragic shooting death of Walter Scott by the hands of a South Carolina police officer. That officer, was charged with murder. Just one day later another South Carolina officer from North Augusta has been arrested and charged in the murder of another unarmed black man, Ernest Satterwhite who was parked in his own driveway. George Cook AfricanAmericanReports.com

A white public safety officer in South Carolina who fatally shot a black man after a 2014 car chase has been arrested on a felony charge, the state’s Law Enforcement Division announced Tuesday.

Justin Gregory Craven, a 25-year-old North Augusta public safety officer, was charged with discharging a firearm into an occupied vehicle in the February 2014 death of Ernest Satterwhite. If convicted, Craven could go to prison for up to 10 years and face a fine of $1,000.

According to investigators, after Craven attempted to make a traffic stop for a suspected DUI, Satterwhite, 68, led the officer on a car chase from North Augusta to Satterwhite’s home, miles away in Edgefield County. There, investigators say, Craven fired repeatedly through the driver-side door of Satterwhite’s car after Satterwhite had stopped in his driveway.