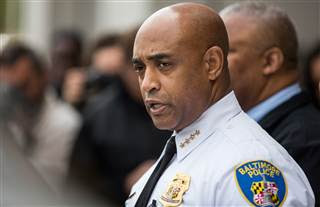 I normally support Baltimore Mayor, Stephanie Rawlings-Blake but I think throwing the police commissioner under the bus for trying to carry out her vision is her just trying to appease the masses and draw attention away from her office. Whatever policies Commissioner Anthony Batts tried to implement and carry out had to have had the mayor's stamp of approval. George Cook AfricanAmericanReports.com

Baltimore Mayor Stephanie Rawlings-Blake replaced the city's police commissioner on Wednesday, saying the city needed to be more focused on suppressing a spike in violence in the months since the death of a man in police custody.

Rawlings-Blake said the police department under Commissioner Anthony Batts had become too preoccupied with internal politics and not enough with stemming a surge in shootings and killings.

"This was not an easy decision, but it is one that is in the best interest of Baltimore," the mayor said in a late afternoon news conference. "The people of Baltimore deserve better. The brave men and women of our department who put their lives on the line to make our cities deserve better."