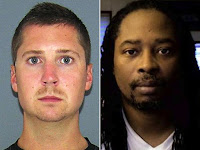 One of the two other University of Cincinnati officers that responded to the Sam DuBose shooting is clearly heard on a body cam video saying that he saw shooter Ray Tensing being dragged. While he said that at the scene, it's not the story he or the other cop told in their official statements or during interviews with the Cincinnati Police Department.

[SOURCE] County Prosecutor Joe Deters says Kidd and Lindenschmidt arrived as Tensing reached into DuBose's car. Their official statements about what happened matched what was shown on Tensing's body camera, and neither officer said in official interviews that he saw Tensing being dragged, according to Deters.

Both officers made comments at the scene but later were interviewed in depth by Cincinnati police about what they had witnessed, according to Deters.

"These officers have been truthful and honest about what happened and no charges are warranted," Deters said.

DuBose's family had asked prosecutors to investigate the other officers. The family's attorney, Mark O'Mara, said in email Friday that they are "still concerned with the initial rendition of facts given by the officers," but he said the family respects the grand jury's decision.