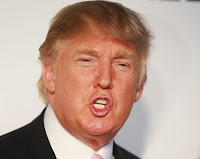 A delusional Donald Trump believes that African American support him above all other candidates running for president. I guess he thinks everyone has forgotten his part in the racist birther nonsense.

A Quinnipiac poll shows that black voters don't care much for The Donald.

Quinnipiac University released a national poll Thursday showing that while Trump is leading the Republican Party nationally, he is polling poorly with black Americans in the general election.

When asked "Would you say that Donald Trump cares about the needs and problems of people like you or not?" 92% of black people said no.

52% of black people said Trump does not have strong leadership qualities.