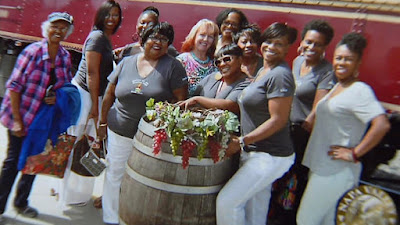 The chief executive of the Napa Valley wine train has apologized for his staff's 'insensitive' actions after their decision to eject 11 African American women for laughing too loud spurred a wave of criticism on social media.
‘The Napa Valley wine train was 100 percent wrong in its handling of this issue,’ said wine train chief executive Anthony ‘Tony’ Giaccio. The organisation hired crisis management pr consultant Sam Singer to handle the situation
‘We accept full responsibility for our failures and for the chain of events that led to this regrettable treatment of our guests,’ said Giacco, who said he apologised in person to Lisa Johnson, leader of the book club.
The wine train did not comment specifically on accusations of racism. But, Giacco promised that staff would receive diversity training.
Giacco said in a letter to book club members, ‘We were insensitive when we asked you to depart our train by marching you down the aisle past all the other passengers.
‘While that was the safest route for disembarking, it showed a lack of sensitivity on our part that I did not fully conceive of until you explained the humiliation of the experience.’
Read more at Napa Valley wine train ‘100 percent wrong’, says CEO