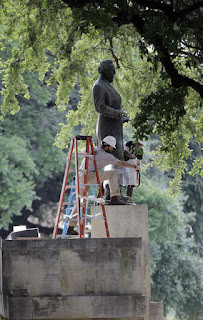 A statue of Jefferson Davis was removed from its pedestal Sunday on the campus of the University of Texas at Austin, days after a court rejected an appeal from a Confederate heritage group.

Crews were seen removing the statue of the Confederate president from its place near the university's iconic clock tower.

Davis' statue will eventually be displayed in the Briscoe Center history museum on campus, which university officials said is a more appropriate place for it. The Briscoe Center has one of the nation's largest archives on slavery.