Why Marvel is lazy when it comes to creating new minority characters.

Why Marvel is lazy when it comes to creating minority characters.

Now I’m just as much of a geek as any other comic book reader or comic book movie lover out there. I love what Marvel Comics is doing on screen and in print recently. In the movies there has been some diversity with characters such as Blade (The forgotten Marvel hero who helped usher in the superhero movie era), War Machine, Falcon, Nick Fury, Storm, and soon The Black Panther to name a few. But (there’s always a but) when it comes to adding diversity in the comics Marvel is becoming a bit lazy. Recently when it comes to adding diversity in terms of race Marvel has simply been reinventing older characters as minority characters. 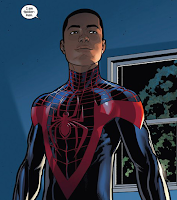 One of the more famous examples being the Miles Morales Spiderman which is great and all but didn’t take much creativity in my opinion. Other examples include a recent reinvention with the comic Moon Girl and Devil Dinosaur (Never heard of it either) in which a character that once was a white boy has been changed to a black girl.The character Of Ms. Marvel is no longer a white woman but a Pakistani teen named Kamal Khan.

And yes I know about the dozens of alternate universes and different versions of the same character which is why Nick Fury can be white in one universe and black in another but those are still reinventions. To those who don't really read comics I'm not going to explain all of the different universes because quite frankly it would be easier to explain Quantum Theory to you. 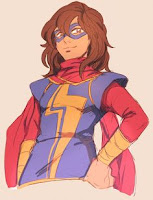 It’s great that Marvel has made moves to add diversity, but why couldn’t they do so by creating completely new characters? Marvel is taking the lazy way out.

I’m talking new characters with complete origin stories and all. Yes, it may be a little more work than simply changing the color of an existing character but it’s also creating something new and hopefully exciting. I know there is some fear in how fan boys will react but they will get over it. I’ve also wondered if comic execs use the fan boys as a convenient excuse not to create new non- white characters.

Marvel can bring in young minority talent and I’m sure that marvel can create minority characters from scratch. Just like with other characters it will be hit or miss, but you can’t get a hit if you don’t take a swing.

Take a swing at it Marvel!