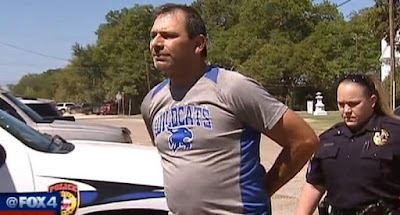 A Texas man who raised almost $6,000 in funds online to repair his truck was arrested on Friday after authorities determined that he vandalized the vehicle himself and tried to blame supporters of the Black Lives Matter movement for the damage, KDFW-TV reported.Police charged 45-year-old Scott Lattin with making a false report after arresting him at his home in Whitney, Texas. While the suspect denied the accusation during a brief on-camera interview, his arrest warrant stated that he admitted to damaging the truck for “insurance reasons.”

Posted by Councilman George L. Cook III at 8:00 AM