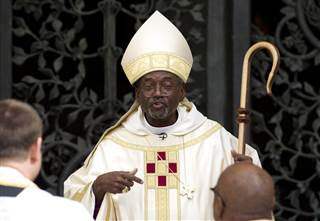 Curry used the example of his own mother being given Communion at a white Episcopal parish before desegregation, and how that act persuaded his father to join the denomination, and eventually become a priest.

"God has not given up on the world and God is not finished with the Episcopal Church yet," Curry said, during a joyous ceremony in the Washington National Cathedral.

Curry, 62, succeeds Katharine Jefferts Schori, who was the first woman in the job and is ending her nine-year term. He served about 15 years as leader of the Diocese of North Carolina before he was overwhelmingly elected last summer to the top church post. He grew up in Buffalo, New York, and earned degrees from Hobart College in Geneva, New York, and Yale Divinity School.