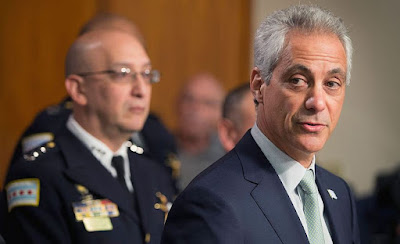 After the recent deaths of Laquan McDonald, Bettie Jones and Quintonio LeGrier, Chicago Mayor Rahm Emanuel is making some reforms when it comes to how and when Chicago Police use deadly force. While these changes are for the better it infuriated me that these are things that are not already in place in a modern big city police department. George Cook AfricanAmericanReports.com.

Chicago Mayor Rahm Emanuel announced Wednesday that the city will overhaul police tactics and training to mitigate tension between residents and officers following the outrage caused by the deadly police shootings of Laquan McDonald in 2014 and Bettie Jones and Quintonio LeGrier on Saturday.

Emanuel said that any officer involved in a shooting will be put on desk duty for 30 days. Previously, they were only subject to three days of desk duty, even if the shooting was fatal.

The police department will also double the number of tasers used by police to 1,400 and will encourage trained officers to use them first before drawing a gun, Emanuel said.

After reviewing crisis response tactics over the past couple months, the city of Chicago has set an initiative to improve communications between officers and individuals in tense situations.

"Force can be the last option, not the first choice," Emanuel said. "The goal is to make sure everyone goes home safely."