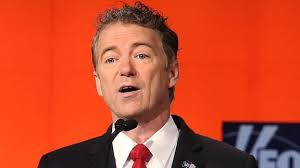 I don't support any of the republican candidates but I found this interesting, especially since very few if any issues that affect African Americans have been discussed during the republican debates. Just as an aside I also found it interesting that a question about African Americans and policing was directed to Paul and not Ben Carson. (Yes he was on stage last night). George L. Cook III AfricanAmericanReports.com.

During Thursday night's republican debate Rand Paul was asked a question by YouTube star Mark Watson about African Americans and policing with regard to body cameras. Paul took the question as an opportunity to point out inequities in the American justice system.

One thing I discovered in Ferguson was that a third of the budget for the city of Ferguson was being reaped by civil fines. People were just being fined to death. Now you and I and many of the people in this audience, if we get a $100 fine, we can survive it. If you're living on the edge of poverty and you get a $100 fine or your car towed, a lot of times you lose your job.

I think something has to change. I think it's a big thing that our party needs to be part of. And I've been a leader in Congress on trying to bring about criminal justice reform.