Gabrielle Union: Who is Stacey Dash? 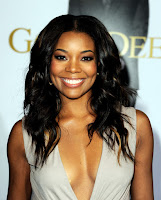 When asked about Dash’s comments at the Sundance Film Festival premiere of “The Birth of a Nation” on Monday, Union first replied, “Who’s that? Who’s Stacey Dash? Is she like related to Dame Dash? Was she on Roc-A-Fella (Records)?”

Union said the BET Awards remain necessary because of the lack of diversity in mainstream awards.

“The more that we focus on inclusion and a true representation of this country, I think that crazy lady will have less to say,” Union said of Dash.

Union has a TV series on BET called “Being Mary Jane.”

[SOURCE]
Posted by Councilman George L. Cook III at 7:36 AM