Did you know that Art Shell was the first black NFL head coach? 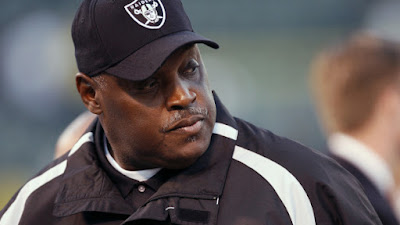 NFL Hall of Famer, Art Shell was a third-round draft pick in 1968. He played on Oakland’s special teams for two seasons and then became the team’s starting offensive left tackle. During the 1970s, Shell was a key part of the Raiders’ notoriously intimidating offense. While Shell was a player, the Raiders played in 23 post-season games, including eight AFL/AFC championships, and won the Super Bowl twice. Shell himself played in eight Pro Bowl games and was a first- or second-team All-Pro every year from 1973 to 1978.

Shell retired from football after one season in L.A. In 1989, he returned to the Raiders as a coach. He was the first black man in modern football history to become the head coach of an NFL team. In five seasons, Shell’s Raiders went 56-41. They went to the playoffs four times and to the AFC championship game once. But in the 1994 season, the team could only manage a 9-7 record, and Shell lost

Posted by Councilman George L. Cook III at 10:04 AM