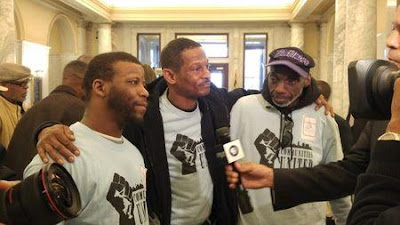 Baltimore community organizer Perry Hopkins, 55, is looking forward to stepping into a voting booth for the first time in his life this election season.

Hopkins lost his never-exercised right to vote when he was convicted for drug and other offenses. He gained it back last month when Maryland joined a growing list of U.S. states making it easier for ex-convicts to vote.

"To have the right to vote now is empowering. I'm stoked," said Hopkins, who spent a total of 19 years in prison for non-violent crimes, and was one of 40,000 in the state to regain his right to vote from a legislative action.

Clinton, the front-runner in the race for the Democratic presidential nomination, on Nov. 8.

Hopkins is among some 800,000 Americans who have regained the right to vote in the last two decades as about two dozen states have eased restrictions on felons casting ballots, according to the Sentencing Project, a prison reform advocacy group.

The restoration of voting rights has drawn support from both Democrats and Republicans as a way to improve prisoners' reintegration into society.