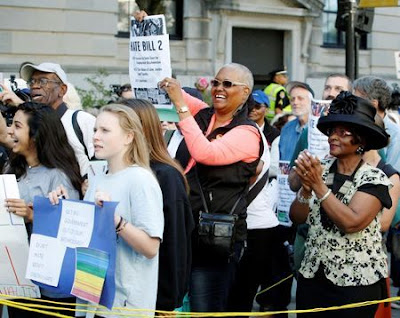 The U.S. battle over bathrooms and wedding cakes is pushing many African-American leaders in the South to the forefront of the latest civil rights frontier, as the threat of discrimination overshadows long-held reservations on gay issues.

In Mississippi, black legislators have led calls to repeal their state's newly adopted law permitting those with religious objections to deny wedding services to same-sex couples and impose dress and bathroom limits on transgender residents.

The president of the National Association for the Advancement of Colored People (NAACP) in Mississippi is a plaintiff in a lawsuit seeking to block the measure from taking effect on July 1. A federal judge was to hear testimony in the case on Thursday.

In North Carolina, dozens have been arrested at statehouse rallies organized by a diverse coalition led by the state NAACP conference to protest a new law barring transgender people from using the bathrooms of their choice.

"Here we are again, facing discrimination towards a group of people," said Sonya Williams Barnes, a Mississippi black lawmaker who opposed the measure and fears that her race could be the next target. "Who knows where that is going to lead to."

Just four years after President Barack Obama rocked the religious black community by supporting gay marriage, black leaders are becoming some of the most forceful allies in the fight against a recent wave of legislation seen as harmful to lesbians, gays, bisexuals and transgender (LGBT) people.