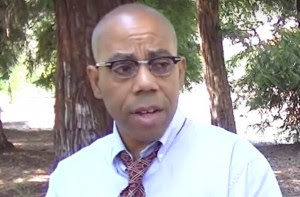 Donald Trump stirred up controversy by repeatedly referring to a black man at a rally in Redding, California as "My African American". That black man's name is Gregory Cheadle, and he is a Republican from Happy Valley in the running for the 1st Congressional District.

He says that he took no offense at being called Trump's African american and was happy that the Republican candidate came to Redding.

In a excerpt from an article in the Record Spotlight Cheadle explained why he took no offense:

Cheadle said African-Americans have historically been dismissed by politicians, which is why they were so quick to support President Obama, the country’s first black president.

So it was gratifying to him and he was proud that someone like Trump would acknowledge him in an audience that was 99.99 percent white, he said.

“To give the black folk the time of the day, I was happy.” Cheadle said.

“You know what I was talking about? Jobs, jobs, jobs,” Cheadle said, paraphrasing what Trump told him. “I said, ‘Yeah, jobs.’ It’s all a fog. I’m glad I’m not on the witness stand. But it means a lot to me when a person of his stature can come to Redding.”