Why what you call a terrorist doesn't matter lesson for dummies! 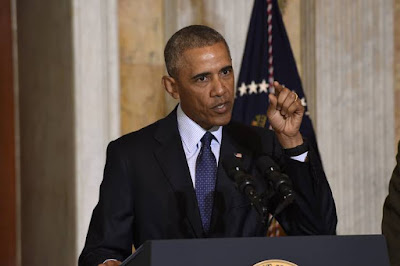 Today, an annoyed President Obama addressed Donald Trump's ridiculous statements about a Muslim ban in the wake of the Orlando shootings. He also took on those who whine because President Obama and his administration doesn't use terms like radical Islam or radical jihadist terrorism. In his own way he broke it down to say that it doesn't make a difference what we call them, they will still try to attack us. Most rational people would get the President's argument but Trump and his supporters and like ilk just don't get it. So I'm here to explain it to them using something they can understand, zombies.

We all know what zombies are and can agree that they are not very nice to be around with their nasty habit of trying to eat people. The living dead go by many names like zombies, walkers, biters, or the infected. For arguments sake, I have invented the term Radical Infected Dead Cannibal to describe the living dead.

Now must sane people know no matter what you call them things are going to end badly if you encounter them.

If a zombie bites you, you're f*cked!

If a walker bites you, you're f*cked!

If a biter bites you, you're f*cked!

If one of the infected bites you, you're f*cked!

You see, what you call a threat doesn't matter. Do you think calling a zombie a Radical Infected Dead Cannibal is going to make that zombie suddenly stop and say, 'Hey, that hurt my feelings. I'm just going to leave and not bite you now?"

Do you think the military or police would fight the dead hordes differently based on what term you chose to call them? No, those entities are still going to try to eliminate the threat.

Now even Trump supporters should have picked up the pattern there and are probably feeling an unusual feeling coming from their brain region. Don't worry that's called thinking and it won't hurt you.

How about we stop wasting time arguing a useless thing like what to call terrorist and worry about how to keep a terrorist from getting assault rifles while in the United States. You know like keeping people under incestigation for terrorism or that or own the no fly list from buying weapons? That would actually help.