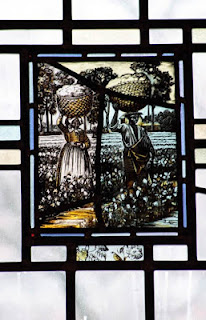 Corey Menafee, who is black with two children and an undergraduate degree in mass communications, was working at the college as a dishwasher. Saying he knew he shouldn't have smashed the window, Menafee explained he was tired of looking at the "racist, very degrading" image. He told reporters, "It's 2016, I shouldn't have to come to work and see things like that."

The window was inside Calhoun College, named for former Vice President John C. Calhoun, an ardent defender of slavery during the 19th century. The college's name has been the subject of protests by students who want it changed. Yale has already said it planned to remove several images related to Calhoun and slavery from school grounds.

The 38-year-old was in court Tuesday facing a felony charge of criminal mischief and a misdemeanor reckless endangerment charge.

Yale University has asked the state not to pursue criminal charges against a former worker who destroyed a stained-glass window depicting slaves in a cotton field.

Yale University has acknowledged that it decided to remove several stained-glass windows at Calhoun College. The windows are to be "conserved for future study and possible contextual exhibition."

Yale says it artist specializing in stained glass will be commissioned to design new windows, with input from the Yale community, including students, on what they should depict.