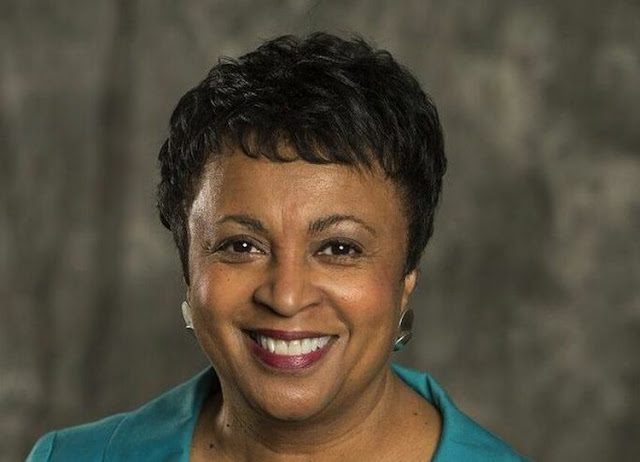 The United States Senate today by a vote of 74-18 confirmed Dr. Carla D. Hayden, longtime chief executive of the Enoch Pratt Free Library system in Baltimore and a former president of the American Library Association, as the 14th Librarian of Congress, for a renewable 10-year term.
Dr. Hayden was nominated by President Barack Obama in February.
"This is truly a great honor to be nominated by President Obama and confirmed by the U.S. Senate to lead the nation’s library, the Library of Congress," Dr. Hayden said. "It has been my privilege to serve the citizens of Baltimore for 23 years and help restore the Enoch Pratt Free Library as a world-renowned institution. I look forward to working with the dedicated staff of the Library of Congress. I will be honored to build on the legacy and accomplishments of my predecessors in this position, to be part of a continuing movement to open the treasure chest that is the Library of Congress even further and to make it a place that can be found and used by everyone."
Dr. Hayden is the first woman, and the first African American, to serve as chief executive of the Library of Congress, the largest library in the world, with 162 million items in its collections. It also oversees the U.S. Copyright Office and the Congressional Research Service. It serves Congress and makes its research collections accessible on site and online.
She takes the helm from Acting Librarian David S. Mao, who has served since the retirement of Dr. James H. Billington on September 30, 2015. She will be sworn in at a date to be determined and is expected to assume her duties soon.
Dr. Hayden has recently overseen the renovation of the central branch of the Enoch Pratt Free Library, a four-year, $112 million project, and has also led $40 million in renovations to other units within the 22-branch Pratt system. The system is named for the businessman and philanthropist who financed its founding in 1886.
She took the helm of the Baltimore system in 1993, winning strong praise for her work to ensure that the city’s library system offers a broad array of services to assist citizens from all walks of life, from access to books and other learning materials to computer access and job information. A program of outreach into neighborhoods served by the Pratt libraries included after-school centers for teens, offering homework assistance and college counseling; a program offering healthy-eating information for residents in areas with insufficient access to high-quality food; programming in Spanish; establishment of an electronic library, and digitization of the Library’s special collections.
Dr. Hayden won high praise, during recent civil unrest in some Baltimore neighborhoods, for keeping library branches open citywide to continue service and provide citizens with safe havens.
Dr. Hayden first served as a children’s librarian in the Chicago Public Library system, eventually rising to the post of deputy commissioner and chief librarian in that system. She also taught Library and Information Science at the University of Pittsburgh. She received Library Journal’s 1995 Librarian of the Year Award, and served as president of the American Library Association 2003-2004.
Dr. Hayden received a B.A. from Roosevelt University and an M.A. and Ph.D. from the Graduate Library School of the University of Chicago.
The Library of Congress is the world’s largest library, offering access to the creative record of the United States – and extensive materials from around the world – both on site and online. It is the main research arm of the U.S. Congress and the home of the U.S. Copyright Office. Explore collections, reference services and other programs and plan a visit at loc.gov, access the official site for U.S. federal legislative information at congress.gov and register create works of authorship at copyright.gov.
Posted by Councilman George L. Cook III at 10:10 AM