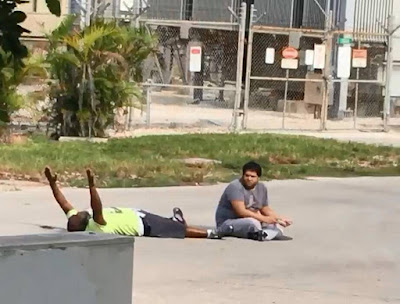 An investigation into the shooting of an unarmed black man as he lay on the ground with his hands in the air is being undertaken by the Florida Department of Law Enforcement, North Miami's police chief said on Thursday.

A cell phone video showed behavioral therapist Charles Kinsey with his hands extended above his chest moments before a bullet struck his leg. The shooting occurred in North Miami while Kinsey was trying to get an autistic man back to a nearby group home from which he had wandered.

Kinsey works at the home, which is operated by the Miami Achievement Center for the Developmentally Disabled.

Kinsey's lawyer Hilton Napoleon of the firm Rasco Klock Perez & Nieto in Coral Gables, Florida, sent the video to Reuters on Thursday. Napoleon did not provide information about who had taken the video. Requests for interviews with Kinsey and his attorney were not immediately answered.

U.S. Attorney General Loretta Lynch said on Thursday the Justice Department was gathering information about the incident, the latest in a series of controversial shootings of black men by police in the United States.

Read more: Shooting of unarmed black man in Florida to be investigated by state