Donald Trump to show up, but not speak out at Detroit church 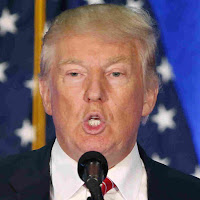 Seems like someone doesn't want to take a chance at getting booed while he's attempting "out reach" to black voters. It seems that Donald Trump's much publicized visit to a black church in Detroit will not include Mr. Trump actually addressing the congregation itself.

When Republican presidential nominee Donald Trump comes to Detroit this weekend to try to strengthen his standing in the African-American community, he will be attending a service at a church and doing a one-on-one interview with the congregation's leader, Bishop Wayne T. Jackson.

Trump won't be speaking to the black congregation at Great Faith Ministries International during the 11 a.m. service. And his Saturday interview with Jackson on the church's Impact Network — which will not be open to the public or the news media — won't air for at least a week after the event.

Trump's first foray as a presidential candidate into a church of African Americans was initially billed as a speech to the congregation to lay out his policies that impact minorities, followed by the interview with Jackson.