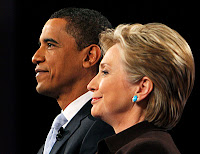 President Barack Obama tells voters he will feel personally insulted if they fail to mobilize in the presidential election, in a new ad released by Priorities USA, the super PAC that supports Democratic presidential nominee Hillary Clinton. The commercial will begin airing Wednesday in Ohio, North Carolina and Florida and will run for at least a week. It's part of a $3 million previously announced ad buy.