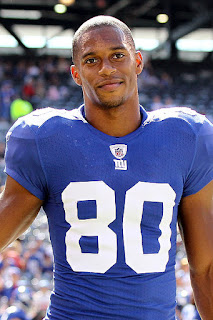 I know there are many in America that prefer that athletes, especially black ones just enjoy their millions and stay quiet on social issues. Thankfully Giants wide receiver Victor Cruz will have none of that. Cruz spoke out on Thursday after the home of teammate Nikita Whitlock was robbed and vandalized with racist graffiti. He sees this as a reflection of the current state of the country after Donald Trump's election. Watch his comments below.