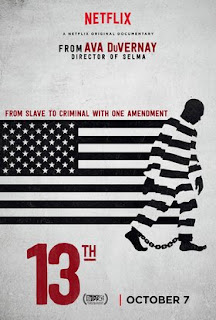 Lost in the hoopla around La La Land's 14 Academy Award nominations and that a record number 6 African American actors received nominations is the news that Director Ava Duvernay's documentary 13th received a nomination in the "Best Documentary" category.

13th, directed by Ava Duvernay explores the history of racial inequality in the United States, focusing on the fact that the nation's prisons are disproportionately filled with African-Americans.

Ava Duvernay released the following statement on the film's nomination:

My thanks to the Academy for amplifying the injustices of mass criminalization and mass incarceration that we chronicle in '13th.' Now more than ever, it is important to educate ourselves, explore our shared history and elevate our awareness about matters of human dignity.

It’s an honor be included in a category with such fine documentarians and to be nominated in a year that truly embraces and celebrates inclusion within our creative community.

The searing look at mass incarceration in the United States is now airing on Netflix.