Three political stories for Democrats to watch in 2017

In 2017 the biggest political story will, of course, be the first year of Donald Trump's presidency. While that is important, there are other political stories that could impact Democrats going forward. Stories about the Obamas, California Senator-Elect Kamala Harris, and Minnesota Rep. Keith Ellison. Read my thought on the three stories I feel will be important below.

Story #1: What will the Barack and Michelle Obama do?

One big question we should all have is what will the Obamas do once President Obama steps down. Will they take some time to just relax or will they get back involved in politics immediaetly? If they do get involved will they use their immense popularity to help Democrats on the national level or more on the local level in an attempt to win back state legislatures. Will they spend more time trying to build up a relatively weak Democratic bench or primarily fund raise. Maybe they will do all of those things or maybe none. It will be very interesting to see how involved these two remain.

Story #2: Will Kamala Harris live up to the hype?

There is no doubting that California Senator-Elect Kamala Harris is a great politician...on the state level. The question has to be will she live up to the hype and praise that several Democratic leaders such as President Obama have heaped upon her? She obviously has all the tools but does she know how to use them on a bigger stage. Another question would be is she ready as a first year US Senatorto accept the role of party savior that some have cast her in. We shall see, although I feel she will do just fine in her first year. 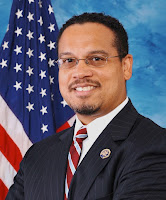 This story could have big implications for Democrats for years to come. Will the ultra progressive Keith Ellison win in his bid to become Democratic National Committee Chairmen? If he does win will he and be able to build up the party to include those progressives who feel that their voices are not being heard by the more traditional Democrats and keep traditional Dems on board? Will he be able to map out a plan help win back seats at all levels from school board, municipal, county, state, and national.

we can't ignore the elephant in the room which is his past ties to the Nation of Islam. While Democrats may accept Ellison's statements on that time in his life over 20 years ago, and the fact that he stepped away from the NOI Republicans are not going to let it go that easy. They will make sure Ellison wears that albatross around his neck.

I believe that Ellison will do a good job if elected but the question is will he be elected?

Those are three stories that will in many ways shape the year that Democrats will have in 2017 and hopefully shape things for the best.

Posted by Councilman George L. Cook III at 10:18 AM

I commented in the wrong place. I don't go on Facebook. Oh well.