My wife and I are always on the lookout for anything that commemorates the historical presidency of Barack Obama. We found another commemorative magazine that we hadn't seen previously and I would like to share that with you all. 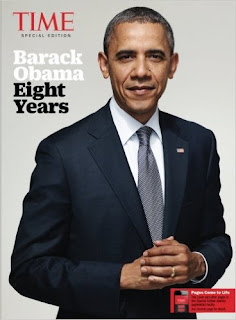 In his historic presidency, Barack Obama led the United States through eight tumultuous and remarkably active years. And in this definitive, one-of-kind Special Edition, TIME’s experts assess the impact his administration had on the U.S. economy, foreign policy, health care and so much more. Along with spectacular and often moving images, TIME’s unmatched writers and reporters give this presidency a clear-eyed context through issues of race, inclusion and military approach. This edition delivers sharp, fresh stories and a bonus: TIME's foray into augmented reality, in which the cover and several inside pages spring to life via curated audio and video pieces accessed easily through the free TIME Special Edition app.

CHECK OUT THE BOOK
Posted by Councilman George L. Cook III at 10:07 AM