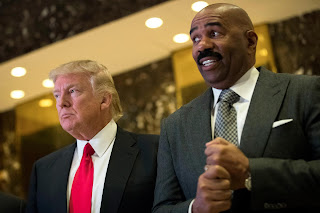 Donald Trump has made many statements about what he would do for African Americans if elected. He said that he would do such an excellent job of making the lives of African Americans better that in four years they would vote for him in record numbers. He even staged a dog, and pony shows with the likes of Ray Lewis, Steve Harvey, and Martin Luther King III to show how much he cared them. He promised many things, but the updated White House website reflects none of that.

There are no mentions of civil rights, voting rights, housing, or education under the issues tab. This is what comes up today on 01/22/2017: 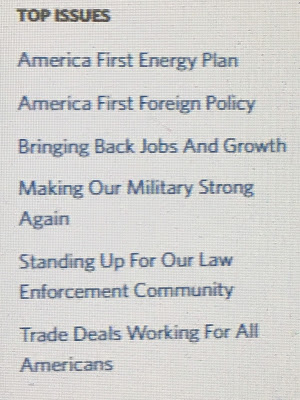 Not that some of those issues are not important to the country as a whole, but it's very telling that the civil rights tab that used to be there has been moved. That shows that this issue is not important to Trump and that he has and only will pay lip service to it.

When it comes to housing not being mentioned Trump's appointment of Ben Carson as leader of HUD lets us know all that we need to know about how important Trump feels this issue is.

Also an ominous sign for African Americans is where Trump promises to stand up for our law enforcement community. What does he mean by that? He has already nominated a man to be U.S. Attorney General who is no fan federal investigations in police forces across the nation. He has also spoken in favor of the "policing" policy known as stop & frisk which catches very few criminals and only works to even further alienate the police from the community. Will Trump support bad cops such as Micheal Slager who shot an unarmed man to death as he ran away from him?

The updated site also does not mention of education at all which should be a major issue to all regardless of race. That's not on the site because then Trump would have to show the cuts he plans to make to education that would overwhelmingly affect black and brown students as well as hurt black colleges like Talladega College that marched in Trump's inaugural parade.

As for voting rights I didn't expect anything to be there because if many of these bogus voting laws had been struck down, you can make an argument that Trump would not be president. Why allow people to vote who would not enable you to remain in power four years from now?

Steve Harvey and Armstrong Williams have asked black people to wait and see what Trump does. Well if the updated website is any indication he is not going to do much.