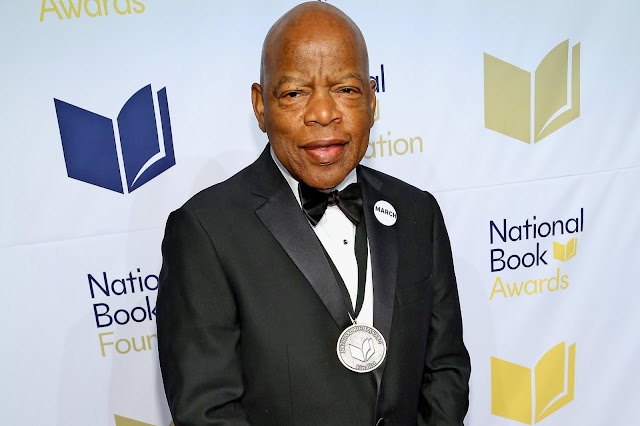 U.S. Rep. John Lewis is having quite a run in the literary world.

On Monday, the American Library Association released its annual list of awards for children's books and announced the Georgia Democrat received a record four prizes for "March: Book Three," the last of a graphic trilogy about his civil-rights activism and winner last fall of the National Book Award for young people's literature. The latest honors for "March," a collaboration among Lewis, congressional aide Andrew Aydin and illustrator Nate Powell, include the Coretta Scott King award for best children's book by an African-American and the Michael L. Printz Award for excellence in children's literature. All three "March" books recently reached high on best-seller lists after a harsh public exchange between Lewis and President Donald Trump, whose legitimacy Lewis has challenged.

"I'm delighted and honored that America's librarians are supporting March with these awards," Rep. Lewis, 76, said in a statement. "I love books and I love librarians. When I was growing up I tried to read every single thing I could. I hope these awards will help inspire all of our young people — and some of us not so young — to read, to learn, and to act. 'March' is a guidebook reminding us that we all must speak up and stand up for what is right, what is fair, and what is just."

CHECK OUT THE BOOK

Discover the inside story of the Civil Rights Movement through the eyes of one of its most iconic figures, Congressman John Lewis. March is the award-winning, #1 bestselling graphic novel trilogy recounting his life in the movement, co-written with Andrew Aydin and drawn by Nate Powell. This commemorative set contains all three volumes of March in a beautiful slipcase.