The controversial man behind blacksfortrump2020.com 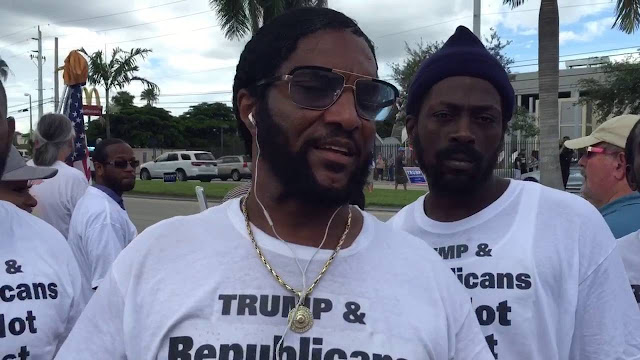 If you saw video of Trump's 02/18/2017 "love me please" rally then you have seen strategically placed black people holding signs that read Black for Trump 2020. In his desperation to show that African Americans like and support him, Donald Trump has associated himself with a man who was a cult member, small time criminal, and may have been involved in a murder.

The mastermind behind those signs is "Michael the Black Man, " and he is no role model.

From the Miami News Times:

Michael the Black Man, also known as Maurice Woodside or Michael Symonette, who has made waves in Miami in recent years with protests against the Democratic Party and rallies for the GOP.

He's also a former member of the murderous Yahweh ben Yahweh cult, which was led by the charismatic preacher Hulon Mitchell Jr., who was charged by the feds in 1990 with conspiracy in killings that included a gruesome beheading in the Everglades.

Michael, along with 15 other Yahweh followers, was charged for allegedly conspiring in two murders; his brother, who was also in the cult, told jurors that Michael had helped beat one man who was later killed and stuck a sharpened stick into another man's eyeball. But jurors found Michael (and six other Yahweh followers) innocent. They sent Mitchell away for 20 years in the federal pen.

In the years that followed, he changed his last name to Symonette, made a career as a musician, started a radio station in Miami and then re-invented himself as Michael the Black Man, an anti-gay, anti-liberal preacher with a golden instinct for getting on TV at GOP events. He's planned events with Rick Santorum and gotten cable news play for bashing Obama.

Since 1997, he's been charged with grand theft auto, carrying a weapon onto an airplane and threatening a police officer, but never convicted in any of those cases.