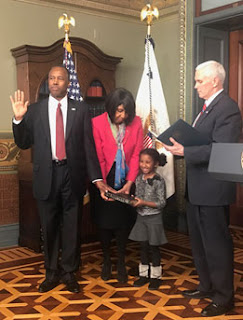 Dr. Ben S. Carson, Sr. was sworn in today as the 17th Secretary of the U.S. Department of Housing and Urban Development (HUD). Vice President Mike Pence administered the oath of office with Secretary Carson's wife Candy and granddaughter Tesora holding the bible. Secretary Carson will now lead a cabinet agency with approximately 8,000 employees and an annual budget totaling more than $40 billion.

Among his first actions in his new role, Secretary Carson plans an ambitious listening tour of select communities and HUD field offices around the country, beginning in his native Detroit.

"I am immensely grateful and deeply humbled to take on such an important role in service to the American people," said Secretary Carson. "Working directly with patients and their families for many years taught me that there is a deep relationship between health and housing. I learned that it's difficult for a child to realize their dreams if he or she doesn't have a proper place to live, and I've seen firsthand how poor housing conditions can rob a person of their potential. I am excited to roll up my sleeves and to get to work."

For nearly 30 years, Secretary Carson served as Director of Pediatric Neurosurgery at the Johns Hopkins Children's Center, a position he assumed when he was just 33 years old, making him the youngest major division director in the hospital's history. Dr. Carson received dozens of honors and awards in recognition of his achievements including the Presidential Medal of Freedom, the nation's highest civilian honor. He is also a recipient of the Spingarn Medal, which is the highest honor bestowed by the National Association for the Advancement of Colored People (NAACP).

Dr. Carson has written nine books, four of which were co-authored with Candy Carson, his wife of 41 years. Together, they co-founded the Carson Scholars Fund, which celebrates young people of all backgrounds for exceptional academic and humanitarian accomplishments. The Fund has recognized more than 7,300 scholars, awarded more than seven million dollars in scholarships, and installed more than 150 Ben Carson Reading Rooms throughout the United States.