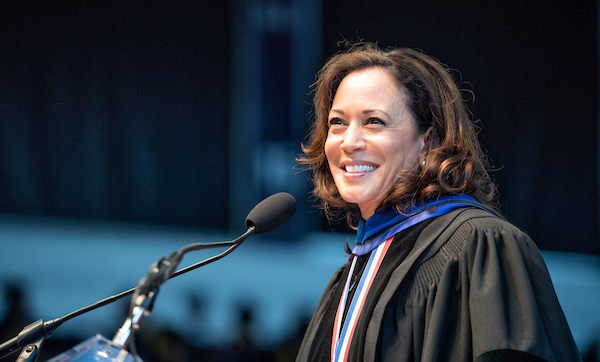 United States Senator Kamala Harris delivered the commencement address Saturday morning at Howard University, urging students to go to the front lines to fight for the nation’s deepest values of justice and equality.
“History has proven that each generation of Howard graduates will forge the way forward for our country and our world, and now graduates it is your turn,” Harris said.  “You are graduating in a very different time than you arrived a few short years ago.”
The Howard University alumna applauded the members of the class of 2017 for their social activism as college students, including their contribution to the 50th anniversary of the March on Washington and participation in the roiling protests of social injustice throughout the country.
“You students have joined the fight for justice — you protested,” Harris said. “From the streets of Ferguson to the halls of the United States Congress, you have lived the words of James Baldwin, ‘There is never a time in the future in which we will work out our salvation. The challenge is in the moment, the time is always now.’”
Harris is both the first African-American and first woman to serve as Attorney General for the state of California. She is the second African-American woman in history to be elected to the United States Senate.
The University has marked the 150th anniversary of its founding throughout the academic year. Howard University President Dr. Wayne A. I. Frederick has said the establishment of the University constituted one of the most noteworthy accomplishments in the history of American colleges and universities.
“It is evident that the success of Howard University is the result of a labor of love and a deeply-rooted desire to pursue a very radical idea, ‘education for all,’” Dr. Frederick said at the ceremony. “As we grapple with the uncertainties of this nation, Howard University will fervently provide solutions to the world’s most pressing issues.”
Howard University conferred 2,173 degrees, including 318 master’s degrees, and 105 Ph.Ds. More than 375 students received professional degrees in law, medicine, pharmacy and dentistry. Howard University has the only dental and pharmacy colleges in the District of Columbia. The 2017 graduates represented 47 states and 39 countries; 157 graduates were from the District of Columbia.
This year’s commencement celebration featured an all-women list of honorary degree recipients.
Anna Pauline “Pauli” Murray was posthumously recognized with an honorary Doctor of Laws. Murray, a 1944 Howard University School of Law graduate, was a quiet force behind some of the most iconic civil rights and social justice events of the 20th century. She was one of the founding members of the National Organization for Women. Murray was also the first African-American woman ordained as an Episcopal priest in 1977.
Maureen Bunyan received an honorary Doctor of Humane Letters. Bunyan is an award-winning journalist and news anchor who is a founder and board member of the International Women’s Media Foundation, and a founder of the National Association of Black Journalists. In her remarks, Bunion said opportunities for Blacks in the mainstream media were born out of the urban rebellions of the 1960s. She urged students to hold the media accountable and to promote the interests of African Americans, immigrants, and other marginalized people.
Howard University also celebrated one of its own renowned scholars. Dr. Eleanor W. Traylor received an honorary Doctor of Letters. Dr. Traylor is a Howard University graduate professor of English and an acclaimed scholar and critic in African-American literature and criticism.
Dr. Traylor said Howard inspired her vocational commitment “to prepare the next generation for its work – seriously, relentlessly, and even ruthlessly.”  She said the institution had “mapped a way out of no way on the road to excellence” in its 150-year history. “The real beauty of this day is equaled only to that day when the idea of our University was born.”
About Howard University
Founded in 1867, Howard University is a private research university comprised of 13 schools and colleges. Students pursue studies in more than 120 areas leading to undergraduate, graduate and professional degrees. Over the past 20 years, the University has produced four Rhodes Scholars, nine Truman Scholars, two Marshall Scholars, over 80 Fulbright recipients, 22 Pickering Fellows and one Schwarzman Scholar. Howard also produces more on-campus African-American Ph.D. recipients than any other university in the United States.


Posted by Councilman George L. Cook III at 7:40 AM