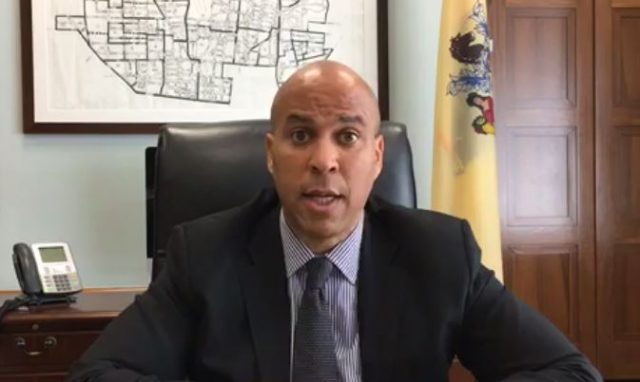 U.S. Senator Cory Booker (D-NJ) today introduced a landmark bill to reverse decades of failed drug policy that has disproportionately impacted communities of color. Booker announced the bill earlier today on Facebook Live.
The Marijuana Justice Act would remove marijuana from the list of controlled substances, making it legal at the federal level. The bill would also incentivize states through federal funds to change their marijuana laws if those laws were shown to have a disproportionate effect on low-income individuals and/or people of color.
The bill is retroactive and would apply to those already serving time behind bars for marijuana-related offenses, providing for a judge’s review of marijuana sentences.
“Our country’s drug laws are badly broken and need to be fixed,” Senator Booker said. “They don’t make our communities any safer – instead they divert critical resources from fighting violent crimes, tear families apart, unfairly impact low-income communities and communities of color, and waste billions in taxpayer dollars each year.
“Descheduling marijuana and applying that change retroactively to people currently serving time for marijuana offenses is a necessary step in correcting this unjust system. States have so far led the way in reforming our criminal justice system and it’s about time the federal government catches up and begins to assert leadership.”
"This bill is the most ambitious marijuana bill we have seen in Congress,” Queen Adesuyi, Policy Associate at the Drug Policy Alliance, said. “Uniquely, it recognizes the fact that people of color have borne the brunt of the failed war on drugs and seeks to repair the damage done. We applaud Senator Booker for his leadership on this issue.”
Arrests for marijuana now account for more than half of all drug arrests in the U.S., and black Americans too often bear the brunt of these misguided laws. Blacks are nearly four times as likely to be arrested for marijuana possession as whites are, despite the fact that there’s no difference in marijuana use between the two groups.
Current drug laws have led police officers to arrest more Americans for possession of marijuana than for all violent crimes – armed robbery, murder, sexual assault – combined.
The Marijuana Justice Act seeks to reverse these troubling trends and fix our broken marijuana laws.
Specifically, the Marijuana Justice Act will:
·         Remove marijuana from the list of controlled substances, making it legal at the federal level;
·         Incentivize states through federal funds to change their marijuana laws if marijuana in the state is illegal and the state disproportionately arrests or incarcerates low-income individuals and people of color for marijuana-related offenses;
·         Automatically expunge federal marijuana use and possession crimes;
·         Allow an individual currently serving time in federal prison for marijuana use or possession crimes to petition a court for a resentencing;
·         Create a community reinvestment fund to reinvest in communities most impacted by the failed War on Drugs and allow those funds to be invested in the following programs:
o   Job training;
o   Reentry services;
o   Expenses related to the expungement of convictions;
o   Public libraries;
o   Community centers;
o   Programs and opportunities dedicated to youth; and
o   Health education programs.
Booker has seen the effects of our broken marijuana laws first-hand, dating back to his time as a tenant lawyer, City Council member, and Mayor of Newark, where he created the city’s first office of prisoner re-entry to help formerly incarcerated individuals re-integrate into their communities.
In the Senate, Booker has been an outspoken critic of Attorney General Jeff Sessions’ effort to revive the failed War on Drugs. Earlier this year, he re-introduced the bipartisan CARERS Act, which would allow patients to access medical marijuana in states where it’s legal without fear of federal prosecution. He is also co-author of bills to restrict the use of juvenile solitary confinement and reform the way women are treated behind bars.