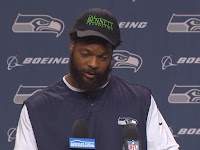 Seattle Seahawks star Michael Bennet has accused Las Vegas Police of throwing him to to the ground and threatening to blow his head off after he and others fled what many believed were gun shots. He like the others fleeing was seeking safety but believes that police singled him out for being black. Bennet discusses his altercation with Las Vegas police at a news conference. Bennet is obviously distraught and explained how he feels lucky to be alive.