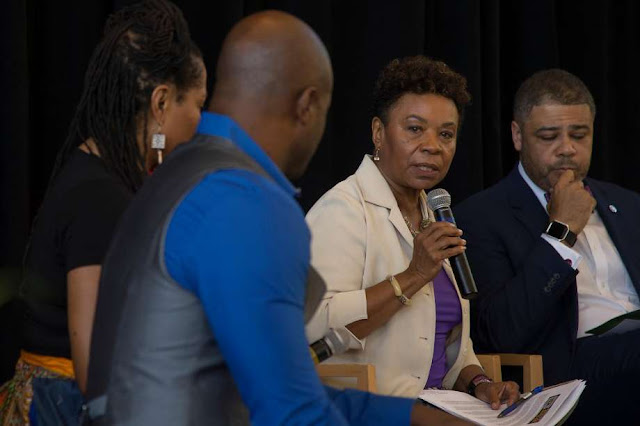 Nearly five months to the day before his inauguration, then-Republican nominee Donald Trump tried to pitch his campaign to black voters with a single question: “What do you have to lose?”

Three months after his inauguration, the Congressional Black Caucus eagerly responded with a 130-page policy document entitled “We have a Lot to Lose,” outlining legislation they say would help African Americans and similarly marginalized communities.

That request fell on deaf ears, Rep. Barbara Lee, D-Oakland, said Saturday at an annual “State of Black America” panel at Laney College. She encouraged people at the Making Connections event to “be at the table with the black agenda and demand those resources,” with or without help from the administration.

“Remember President Trump said ‘What do we have to lose?’ to the black community? Well, we answered him and sent him an entire agenda as it relates to the African American community,” Lee said. Trump “invited us to come to the White House and Cedric Richmond, our chair, said no. He was fully disgusted with our president and his agenda on all of the issues that we’re talking about today.”

“The Congressional Black Caucus is not only the heart and soul of the resistance movement in Congress but also leading on so many issues that we care about here in the Bay Area,” said Lee, a caucus member.

The panel highlighted a number of concerns for the group of a few hundred people, predominantly African Americans, in the audience, including economic disparity between black and white communities, homelessness, housing struggles and criminal justice reform.

Posted by Councilman George L. Cook III at 8:25 AM