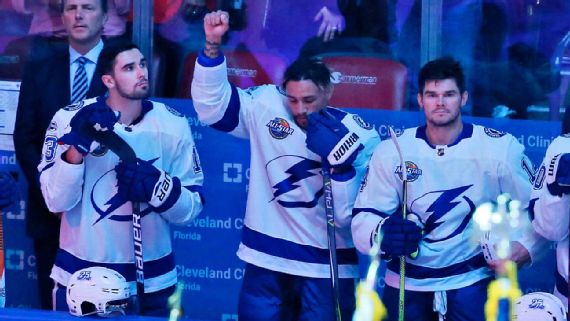 Tampa Bay Lightning forward J.T. Brown raised his right fist during the playing of the national anthem before the team's first road game of the season.

Tampa Bay Lightning forward J.T. Brown says he isn't going to back down anytime soon, standing behind his decision to fund the relocation of a Confederate statue in Tampa and stay vocal when it comes to issues concerning minorities.

It is the first known demonstration of any kind during the anthem in an NHL regular-season game. The NHL has no rules governing what players must do during the national anthem.

Brown, who was scratched for Tampa Bay's season-opening win against Florida, remained standing throughout the anthem Saturday night. Brown, one of approximately 30 black players in the NHL, used the same protest before a preseason game against the Panthers last month.

"I wanted to do something to show my support," Brown told the Tampa Bay Times after the Lightning's 5-4 loss to the Florida Panthers on Saturday. "There are some issues that we have to talk about. So, in my mind, just trying to bring a little more awareness, and any type of conversation that we can get started would be great. I know there's going to be negative backlash. But, in my heart, I know I did what was right."

The Lightning issued a statement later Saturday, saying, "The Tampa Bay Lightning celebrate the moment before every game when we can unite as a community, paying homage to a flag that is representative of our nation and those who have sacrificed. At the same time, we respect our players and individual choices they may make on social and political issues."