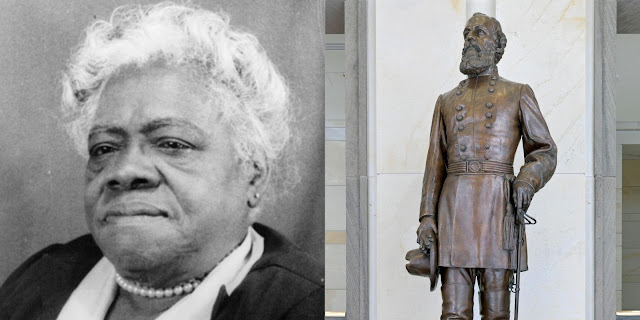 The state Senate voted unanimously Wednesday to install a statue of educator Mary McLeod Bethune in the spot where a statue of Gen. Edmund Kirby Smith still stands.

"It's a way of recognizing our history, but also our diversity. It shows Florida in our best light," said the bill's sponsor, Democratic Sen. Perry Thurston. "It's a major message. It shows not only Florida, but the nation that we are coming together and trying to recognize all of our history."

Two years ago the state Legislature voted to remove Smith's statue from the U.S. Capitol over the objection of some members who said that was an effort to erase Southern history.

Smith is famously remembered as the last Confederate officer to surrender a significant force at the end of the Civil War, nearly two months after Gen. Robert E. Lee surrendered to Gen. Ulysses S. Grant in Virginia and formally ended the war on April 9, 1865.

The law requiring the removal of the Smith statue set up a process to replace it.

An independent committee reviewed 130 recommendations from Floridians and presented the Legislature with three choices: Bethune; Marjory Stoneman Douglas, who wrote "The Everglades: River of Grass" and is credited with helping create that national park preserving 1.5 million acres (607,000 hectares) of wetlands in southern Florida; and George Washington Jenkins, who started the Publix supermarket chain.

Bethune was the committee's only unanimous choice.