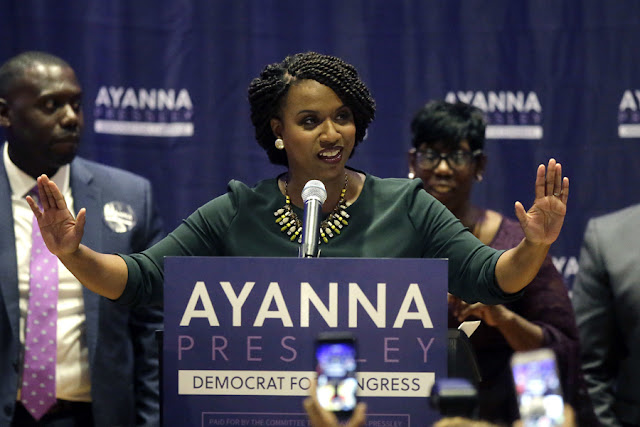 Ayanna Pressley upended the Massachusetts political order on Tuesday, scoring a stunning upset of 10-term Representative Michael Capuano and positioning herself to become the first African-American woman to represent the state in Congress.

Ms. Pressley’s triumph was in sync with a restless political climate that has fueled victories for underdogs, women and minorities elsewhere this election season, and it delivered another stark message to the Democratic establishment that newcomers on the insurgent left were unwilling to wait their turn. Ms. Pressley propelled her candidacy with urgency, arguing that in the age of Trump, “change can’t wait.”

Her victory carried echoes of the surprise win in June by Alexandria Ocasio-Cortez, who trounced a longtime House incumbent, Joseph Crowley, in New York. Ms. Pressley is also among several African-American progressives who beat expectations, and in some cases performed far better than polling projections; they include Stacey Abrams of Georgia, Andrew Gillum of Florida and Ben Jealous of Maryland, who each won the Democratic Party’s nominations for governor.

There is no Republican on the November ballot in this storied Boston-based district, which was once represented by John F. Kennedy and is one of the most left leaning in the country.

Addressing jubilant supporters at a union hall in Dorchester Tuesday night, Ms. Pressley said: “It seems like change is on the way.”

Speaking in abnormally hushed tones, in contrast to her fiery and impassioned style on the campaign trail, she told supporters “we have together ushered in something incredible.”

“People who feel seen and heard for the first time in their lives, a stakehold in democracy and a promise for our future,” she said. “That is the real victory, that is bigger than any electoral victory. And I want to thank you all for being foot soldiers in this movement and for ushering in this change.”