Ciara Sivels: First Black woman to get her doctorate in Nuclear Engineering from University of Michigan 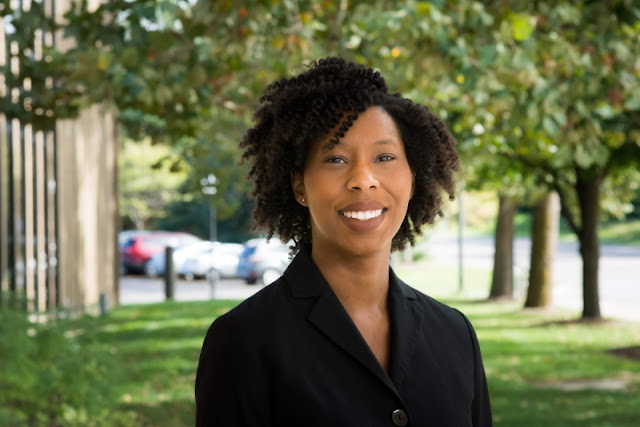 Throughout much of her life, Ciara Sivels had dreams of becoming a chef. Now she is the first Black woman to get a doctoral degree in Nuclear Engineering from the University of Michigan.

“I really had no idea (about engineering) until my junior year of high school,” Sivels said. “I had a teacher suggest I look into engineering because I had always been at good at chemistry and math, and I constantly excelled in all my classes.”

Sivels attended Hickory High School in Chesapeake, Va. As a student, she was busy working to balance multiple Advanced Placement credits and after-school programs, such as her school’s Scholastic Bowl. She was also highly active within her church community.
As senior year progressed, she started applying to different engineering schools. Though the Massachusetts Institute of Technology was her “reach school,” she was accepted.

When she arrived at MIT, Sivels had a heavy background in chemistry. But one of her mentors suggested she look into the nuclear field as she became interested in energy, antimatter and the nonproliferation of nuclear weapons.

“(MIT) was a change because I wasn’t prepared to go into engineering, so I didn’t take all of the classes that I need to take, such as physics,” Sivels said. “So, it was a struggle, as MIT is known for having rigorous academics.”

Yasmine Doleyres, Sivels’s roommate at both MIT and later at the University of Michigan, spoke on her work ethic and triumphs at the challenging universities.

“Ciara is a very balanced person,” Doleyres said. “She is passionate about her work, and loves getting into conversations about why it is very relevant, especially in the present day with different nuclear incidents. She is determined to continue her work and to do it well.”

In between her undergraduate degree and PhD, in Cambridge, Massachusetts, Sivels became a chemistry teaching assistant and worked briefly with Teachers for America on an internship. Because of this work, she began to feel a pull toward academia.

Yet, an academic advisor suggested Sivels look into a master’s program before deciding to professionally teach. So, she looked to the University of Michigan for the next chapter of her education.

“Because I struggled at MIT, my GPA was lower than what was required because I hadn’t taken physics and other basic courses in high school — so I really had to catch up with my peers,” Sivels said. “In order to help me adjust, U of M actually let me come in with a conditional admittance to see how I compare in the program and then finally matriculate into my Ph.D..”

In Ann Arbor, she obtained a fellowship with the GEM National Consortium and connected with the Pacific Northwest National Lab to help with her five-year thesis work pertaining to treaty verification using beta-gamma coincidence detectors. She built a prototype, in collaboration with Nuclear Engineering professor Sara Pozzi and Justin McIntyre, of a radioxenon detector. Radioxenon is a fission product of nuclear explosions and is useful in detecting underground explosions. This product could possibly be put to use in the near future.

Pozzi recalls the ongoing trial-and-error process being done on Sivels’ detectors, and the continual — and still developing — research done within the lab.

“The second prototype actually collapsed during on of the experiments because it was a new detector and was used in certain geocoditions,” she said. “One of the other prototypes also broke, so we had to go back to the drawing board and improve it for the next duration of detectors. Ciara was really able to improve the design and work the external company that provided the detector material in order to produce a more rugged prototype that survived the next test. You know, when you’re pursuing a Ph.D. you never know where you’re gonna end up.”

Within her first year at the University of Michigan, she noticed she was the only Black student pursuing a doctorate in her field. The following year, one more Black woman entered the program. In 2018, there are a total of three Black women pursuing doctoral degrees in nuclear engineering.

According to The Scientista Foundation, in 2010 about 20,570 individuals obtained their doctoral degrees in STEM. Less than 3 percent of those 20,570 were African American women.

“I think the biggest (problem) is exposure,” said Sivels. “Sometimes, in our community we are just not exposed to the opportunities that maybe some other groups are. For me, that was the biggest qualm with my past, because I came into STEM just by chance. It could’ve been a lot easier if I was prepared to go into engineering prior.”

Because of this experience, Sivels, with alum Crystal Green, one of the other Black women in the nuclear engineering doctoral program, worked to increase outreach at the high school level through the Detroit Pre-College Engineering Program.

DAPCEP is a nonprofit organization in Detroit that provides underrepresented youth with innovative educational programming in STEM fields. The University hosts a slew of these programs found in the mechanical, chemical and nuclear studies. Each program is about six weeks long and gathers about 20-30 students to teach them about different types of engineering.

“The goal of DAPCEP is to expose kids to STEM areas earlier, in like middle or high school — there are even some elementary school classes as well,” Sivels said. “This exposure will hopefully provide a foundation that will allow these unrepresented groups to succeed when they pursue an undergraduate education and beyond. We do a lot of hands on activities, such as building a cloud chamber to show them radiation decay. We also show them the difference in nuclear power plants and we even give them a tour of the radiology department in the U of M hospital so they can see the medical applications for nuclear engineering as well. Engineering is so abstract — we try to break it down to a level at which they can understand.”

Sivels also founded the group Women in Nuclear Engineering in Radiological Sciences. This congregation allows for women of all races and ethnicities to gather together and discuss the trials and tribulations of being a women pursuing a degree in STEM.

“The representation isn’t there,” Sivels said. “So when you feel alone or when you feel like you don’t have anyone to talk to -- it’s harder for you to want to stay in the program. (STEM) is a male-dominated field, especially nuclear -- it's quite old and specialized. So it was important in my journey just to have that comradery and to be able to talk about our issues in what we considered a safe space.”

Pozzi, the new director of the University’s Diversity, Equity and Inclusion program for the School of Engineering, states though the University is on its way toward becoming more inclusive, it is still a long ways away from where it should be.

“There is still a lot of work to be done,” she said. “So just getting the word out there and building the pipeline that will bring more students from all backgrounds is necessary. It is really important to let (prospective students) know that there is careers to be had in these fields. The stereotype is that it is white men that hold these positions, but these stereotypes are changing. Ciara is an example of that and it is important that she feels comfortable telling her story and thus become an inspiration for others in the field.”

Overall, Sivels is happy to be done with her schooling and to get to work. As for her title of being the first Black woman to graduate with a doctorate in nuclear engineering — she is indifferent.

“There is one side of it where I am kind of sad, because it’s 2018 and it took so long for us to get to this point. But I am also like, someone’s got to do it. But, this title is not what I focus on. I want to focus on getting the work done, and getting it published and just doing good work overall. For me, this is a chance for other people to see that I have this background, that this was not my first intention, but I still excelled in it. From that perspective, it is a story that people can hopefully look up to and say ‘if she can do it, I can do it.’

At the end of the month, she will begin a job at Johns Hopkins University in the applied physics lab. However, she hopes to eventually transition over to academia to, again, encourage the increase in representation of women of color in the STEM field.