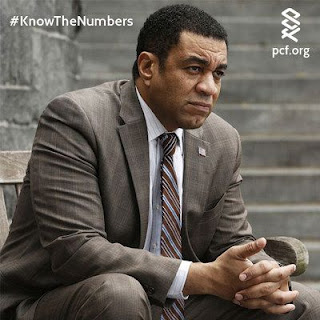 Actor Harry Lennix   who currently co-stars on the NBC drama "The Blacklist," is the face of PCF's 2019 "Know the Numbers" campaign, which encourages men to understand their personal risks for prostate cancer.

"I am honored to serve as an ambassador for the Prostate Cancer Foundation and to use my platform to raise awareness about this insidious disease which has affected so many people close to me," said Lennix.  "In honor of those I have lost, I am encouraging all men, including African Americans who are at heightened risk, to take the time to familiarize themselves with this disease and to take steps to reduce their risk for developing prostate cancer or to catch it early enough to survive it."


Despite recent reports of declining mortality rates for African American men, they remain the hardest hit by prostate cancer, with nearly 20 percent still being affected, and suffer the highest mortality rate from the disease of any racial or ethnic group in the United States. There remains a need to build public awareness about prostate cancer and to provide easy access to critical information, including screening guidelines, prevention and new targeted treatments.  Equally important is destigmatizing the disease through open, honest dialogue, such as this discussion featuring former minority leader of the Georgia House of Representatives, Stacey Abrams, and her father, which will lead to more men becoming proactive about their health.
"Currently, there is focus and large commitment in place to understand why the disparities that affect African American men with prostate cancer exist, and we are finally seeing some progress. But this is not the time to take the foot off the gas; this is the time to accelerate," said Christine N. Jones, Chief Operating Officer, PCF.  "We have a two-pronged approach to address this issue -  education and awareness - which we know is saving lives on the front end, and investment in science, so we can better understand what is going on so precision treatments can be developed."
National Minority Health Month Campaign Highlights
Actor Harry Lennix, who currently co-stars on the NBC drama "The Blacklist," is the face of PCF's 2019 "Know the Numbers" campaign, which encourages men to understand their
ABOUT THE PROSTATE CANCER FOUNDATION The Prostate Cancer Foundation (PCF) is the world's leading philanthropic organization funding and accelerating prostate cancer research. Founded in 1993, PCF has raised more than $788 million and provided funding to more than 2,000 research programs at nearly 200 cancer centers and universities. The PCF global research enterprise now extends to 19 countries. PCF advocates for greater awareness of prostate cancer and more efficient investment of governmental research funds for transformational cancer research. Its efforts have helped produce a 20-fold increase in government funding for prostate cancer. For more information, visit www.pcf.org.
Connect with PCF:Facebook | Twitter | LinkedIn
MEDIA CONTACT:
Colleen McKenna
Prostate Cancer Foundation
(310) 570-4722
cmckenna@pcf.org