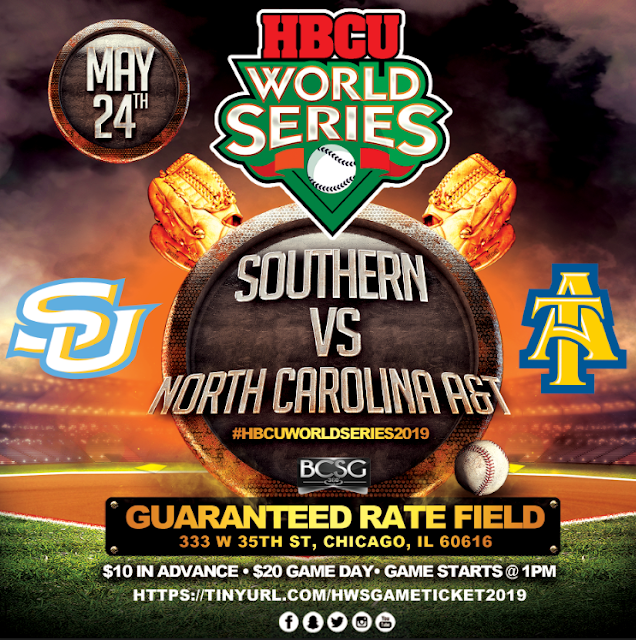 In its inaugural year, the Historically Black College and University World Series is a matchup featuring Southern University and North Carolina A&T University, as they meet on the baseball diamond in an interconference matchup that will crown a HBCU baseball champion. The HBCU World Series will take place on Friday, May 24, 2019. The game allows both the Jaguars and Aggies to write the first chapter in a legendary match up between the Mid-Eastern Athletic Conference (MEAC) and the Southwestern Athletic Conference (SWAC) in the HBCU baseball showdown between the interconference foes.

This event is organized by BCSG 360, which is a global advocate of the Historically Black College and University (HBCU) experience and supported by the Chicago public and private communities. Technical assistance in the development of the tournament has been provided by Black College Nines, which is an organization that supports the legacy of black college baseball.

This one game winner-take-all is for more than bragging rights. It is special to the HBCU community, the student-athletes, coaches and the thousands of fans expected in attendance. This game will crown a much needed national champion of black college baseball while showcasing its participation in the NCAA Division I, the official governing body of both MEAC and SWAC conferences.

The significance of the HBCU World Series between Southern and North Carolina A&T is its relationship to Black College Nines (BCN), a nationally recognized website of current and historical HBCU baseball news which tries to preserve the legacy of historically black college and university baseball. The participants in this year’s world series are those two top ranked teams it the BCN “large school” poll. The poll’s voting committee is made up of an informed and impartial group of individuals who follow college baseball on all levels, including Historically Black Colleges and Universities (HBCU) baseball. Included in the group are college athletic administrators and educators, college baseball writers and other sports journalists and broadcasters, former HBCU and other college ballplayers and above all else… college baseball enthusiasts who have an interest in promoting HBCU baseball.

Last season, Southern University baseball was a train wreck in the SWAC conference. In head coach Kerrick Jackson’s first year, before the start of the 2019 season, a majority of collegiate baseball publishers declared the Jaguars would finish last in the SWAC Western division.

Nearly a year later, the Jaguars got a resume building win defeating the nation’s No. 8th ranked LSU Tigers this past April 9th by the score of 7-2. Southern then captured the program’s first SWAC Western Division title since 2012 and will enter the 2019 SWAC Baseball Tournament as the #1 seed in New Orleans adding to an extraordinary turnaround from a 9-33 team from a year ago. And they sit atop Black College Nines Top 10 Poll looking for the program’s first HBCU Baseball national title.

North Carolina A&T is looking towards winning their second straight Mid-Eastern Athletic Conference (MEAC) Southern Division title and earning the No. 1 seed out of the Southern Division at the MEAC Baseball Tournament. The No. 1 seed out of the south will receive a bye at the 2019 MEAC Baseball Championship Tournament, May 15-18, in Daytona Beach, Florida. The Aggies (26-21 overall and 14-7 in the MEAC) are ranked No. 2 in the latest BCN Top 10 Poll.

Both head coaches agree on the importance of the baseball championship event which will be played at the home of the Chicago White Sox.

NC A&T head coach Ben Hall said, “we’re just honored to have been chosen, love the concept and where we are going with the opportunity to play in the game. When you look across the country and in the SWAC and MEAC, in our division level and even at the Division II level, the programs in HBCU baseball continue to work and push to get themselves to the top. It kind of gives you an exciting opportunity to test yourself against a nearer school or an nearer program whose on the up and up. So I’m just excited about the trip, excited for the opportunity to play Southern and take our team up there and compete with coach Kerrick and his guys.”

Kerrick Jackson Southern head coach on playing the Aggies in Chicago said, “we’re excited about the opportunity of the event to move forward and have a chance to do really, really good. Obviously, it would hold a little more weight if NC A&T wins their tournament, we win our tournament and you are able to truly crown a true HBCU World Series champion. But I think with this being the first year of the tournament, I think its an excellent opportunity to kind of get us out there and build on it for the future.”

BCSG 360 Exective Director Erwin Prentiss Hill worked with Black College Nines in getting the information together and working with both the NCAA and NAIA, who in our opinion were very helpful in providing the regulations, the bylaws and answers needed allowing this and future events for HBCU baseball to host a much needed national baseball championship for HBCU baseball programs. It is an opportunity to play for something more meaningful outside of just competing for a conference championship. We heard the cry of many head coaches over the last ten years. Thanks to Prentiss Hill for all of his dedication and to Black College Nines.