He Served With D-Day’s Only African-American Combat Unit. His Widow Is Still Fighting for His Medal of Honor 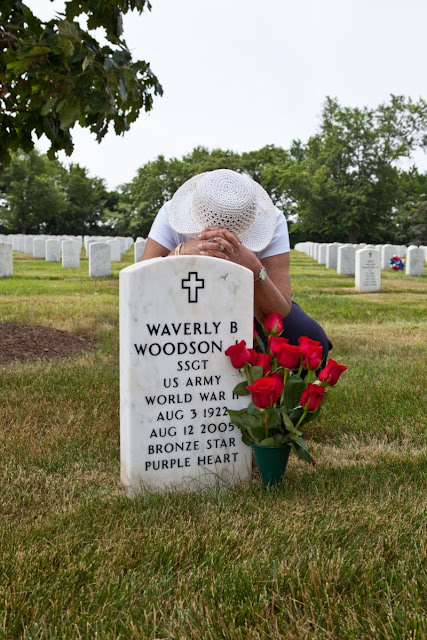 Seventy-five years after American troops landed in smoke, fire and chaos on the beaches of Normandy, France, a Maryland woman is fighting for recognition for her late husband, who is likely D-Day’s last unsung hero.

Corporal Waverly “Woody” Woodson Jr., was a 21-year-old medic from West Philadelphia when he splashed down in four feet of churning sea and waded toward Omaha Beach around 9 a.m. on the morning of June 6, 1944.

Woodson was wounded, hit by burning shrapnel that raked his landing craft and ripped open his buttocks and thigh. The soldier next to him was killed. A medic slapped dressings on Woodson’s wounds, and they, along with three other medics in their crew, crept up the beach while crouched behind a tank. They were the first African-Americans to set their boots on Omaha Beach.

For the next 30 hours, Woodson would survive German snipers and his own searing pain to save scores of lives. Decades later, Woodson would learn that he had been nominated for the Medal of Honor.

But he would not receive it, not even when President Bill Clinton belatedly awarded the nation’s highest award for valor in 1997 to seven black soldiers who’d been denied their D-Day decorations by an Army afflicted by institutional racism. “History has been made whole today,” Clinton said.

Woodson’s white marble gravestone at Arlington National Cemetery is inscribed with his final Army rank — staff sergeant — and his decorations, the Purple Heart and the Bronze Star, the fourth-highest award for bravery.

Waverly Woodson died in 2005 but his widow, Joann Woodson, who turned 90 on May 26, has made it her mission to see that her husband’s heroism is acknowledged. “I will fight for him as long as I live,” Woodson said from her home in Clarksburg, outside Washington, D.C.

Read more: He Served With D-Day’s Only African-American Combat Unit. His Widow Is Still Fighting for His Medal of Honor

Posted by Councilman George L. Cook III at 4:48 AM